*Please read Part 1 for the preface and context. 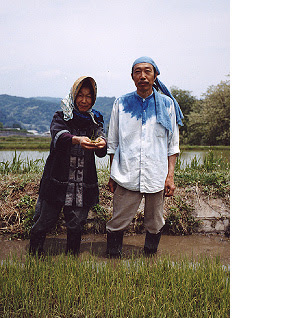 I visited Masanori and Wakako Oe (Oes) who my wonderful friend Andy had persistently encouraged me to meet over the last two years. I knew very little about the Oes, but I trust Andy's recommendations. The Japanese I met through his recommendations in the past have been very impressive people, who shared my vision and values. (click here for that story A Different Kind of Luxury)

The Oes are very grounded old school Japanese hippies living in an alternative culture hotspot full of artists and farmers. They are impressive elders from whom I hope to learn more from in the near future. Andy writes poetically about the Oes so I invite you to at least read the online article to learn more about them. As a teaser here are some interesting highlights, Masanori Oe survived a B-29 machine gun attack as a child, translated The Tibetan Book of the Dead into Japanese, met Timothy Leary and Richard Alpert (aka Ram Daas) when he moved to New York to study film, and was one of the main organisers for the Festival of Life (8/8/88), which has numerous parallels to the original Woodstock Festival.

Our life connections: During the 70s he started the "Hobbit Village" in Nishi Ogikubo (Tokyo), a unique venue with one of the first organic vegetable markets, a restaurant, bookstore, and a free school where my parents attended lamaze lessons in the months before my birth. Coincidence?

Andy's book A Different Kind of Luxury is a great resource to learn more about the Oes philosophy and life, in addition to other exceptional Japanese who live elegantly.

You can read more about the Oes on Andy's blog too 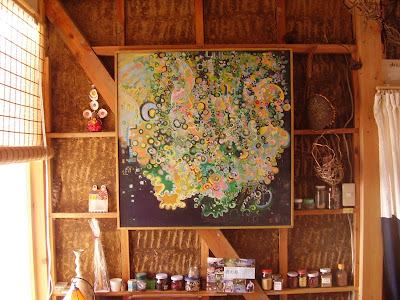 Wakako Oe, with whom my interaction was unfortunately brief, is not only a very experienced farmer but also an artist in all sorts of media including traditional wooden puppets. The Oes' house is decorated with natural art and artful pieces of nature, and their lives are truly fascinating works of art. 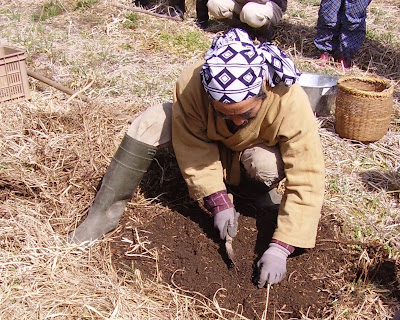 The weekend I visited them coincided with the quarterly Yatsugatake Natural Farming Gathering. Above, the instructor, Mr. Mitsui, is using the kama to cut the soil in order to plant a piece of potato. I was told that the kama is the only tool you need in natural farming, sort of like the machete in parts of Latin America.

The Oes also host students to study natural farming, both rice paddy and gardening, on their land. Masanori started organic farming in the 90s, and after an inspiring encounter with Yoshikazu he transitioned to natural farming. He told me that they bought land recently because it takes years to develop the soil for natural farming and as a renter you might be kicked off the land by the time you finally develop a balanced ecology. I'm still trying to appreciate the fundamental differences between organic farming that I'm familiar with, and natural farming which I'm just starting to understand.
Natural farming is deep and really challenging!

I find it extremely exciting to meet people like the Oes, and it fuels my motivation to leave the alternative West Coast scene in the US that I thrive in, and prepare to return and settle in Japan. Teachers and community makes all the difference, and conscious farmers have been fundamental influences in my life. 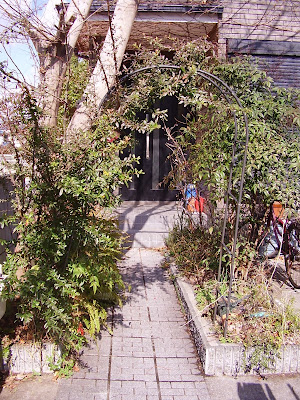 My family home in Osaka.
Its a typical prefab modern house that looks like its made of plastic.
The house is quite small by American standards, but a good size for Japanese.
Very little front yard space that is dedicated to bicycle parking, laundry hanging, and a mini garden.

Above is the garden in all its entirety.
A mini food forest co-created by my mom and nature.
The beds are about two feet wide and about three yards long,
with a mix of fill and store bought soil.

The cast are dwarf cherry, raspberry, goji berry (volunteer), rosemary, climbing rose, ferns (adopted), and a bunch of perennial volunteers including the tree to the left, probably a keyaki (Zelkova serrata). I added an apple tree this year, and we will probably remove the keyaki as it is entangled in the power lines and dropping unsolicited organic matter on our neighbors' concrete. The challenge of urban food forests in extra tiny spaces.

Big trees are uncommon in Japanese cities in comparison to the US, and are more likely to be a source of conflict with neighbors. An American PhD student at University of Tokyo studying urban forests pointed out that Japanese cities have hardly any forests. A key factor might be density. Japanese cities are super dense! 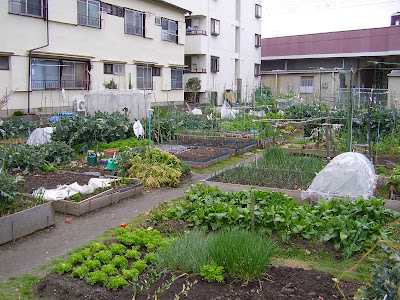 An urban community garden sandwiched in between apartment complexes.
Despite the density and limited community space, I was able to spot numerous community gardens in Osaka and Tokyo.
Yeah!!!

The average age of those tending the community gardens appeared quite high.
Probably only people over 60, and most likely a great source of stories and knowledge. What an awesome resource.

I included my stop in Osaka in this entry because I want to acknowledge the potential that exists in urban areas, and stimulate my desire to engage with that world that I have yet to appreciate.

Next will be the final entry of this series,
and perhaps the most exciting potential project that I've come across.
Posted by Kai 海 at 5:32 PM