Permaculture into the White House パーマカルチャーをホワイトハウスに！

Just got this from the Worldwide Permaculture Network.
I don't know if Obama has ever heard permaculture,
but it looks like he is going to hear about it now.
...and I always love me some student activists educating
el presidente on how to live sustainably.
Permaculture on MTV means new challenges and opportunities.
Lets make sure permaculture doesn't turn into a Ché shirt.

From the Permaculture Research Institute: I’ve got some incredible news to share with you! The permaculture initiative that I facilitate at the University of Massachusetts Amherst (USA) has been selected by the White House as a finalist for the Campus Champions of Change Challenge award! This means we are in the final round and the general public is now voting for which teams will get a trip to the White House (judges selected 15 projects from more than 1000 applications!) The top 5 winners also get featured on a television program called ‘The Deans List’ on MTV.
Imagine the potential this has! This is by far the most important thing that I can be doing for the world right now — I truly feel that in my heart.
We have only 1 week to tally as many votes as we can – voting ends Saturday, March 3 at 11:59PM est (New York time!) Here’s a short description about the student group that I oversee, and how to vote:

UMass Amherst Permaculture is a student group that educates the University of Massachusetts Amherst campus and the local community about ecological permaculture solutions by demonstrating edible perennial landscapes that are highly productive, low maintenance, environmentally sustainable, and socially responsible!

In the Russian and Lithiuanian news. Never thought that would happen.
Himawari and I protesting the export of nuclear technology to Lithuania,
while the Fukushima disaster continues to get worse.

What a bizarre world we live in.


Other countries we are planning to export to are Vietnam, Jordan and Turkey.

Below is Lithuanian news 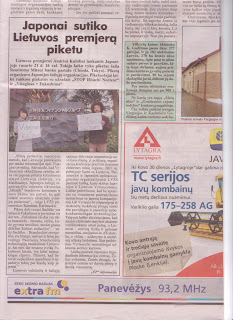 On Feb 11, 2012, over 12,000 people demonstrated on the streets of Tokyo.
Less than the Koenji demonstration that happened on 4.10.11 (last year),
but thats a lot of Japanese protesting! Still not a lot of youth, but its coming.

I attended the afta protest dubbed Drums of Fury.
We drummed through the busiest part of Tokyo, Shinjuku on saturday night.
A lot of people looked shocked and awed. 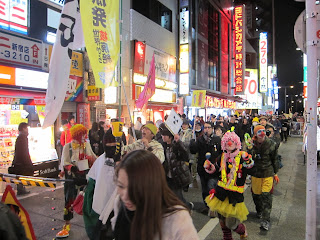 Marching right through the shopping district. 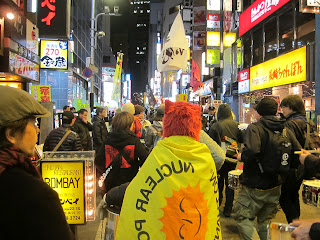 Adding flare to the neon lights of Tokyo. 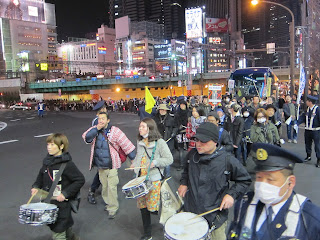 Quite the line of protesters.
We're only allowed to walk on one lane. 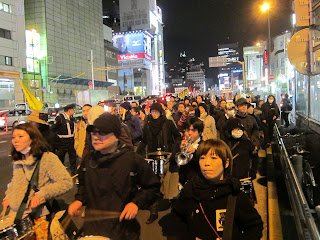 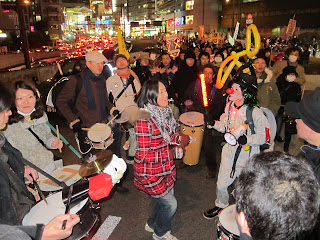 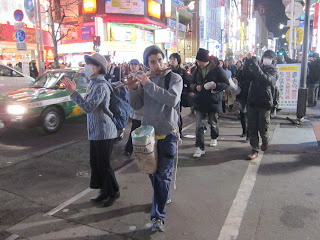 My brother back from Kodo drumming apprenticeship.
He busted the make-shift tin garbage can drum,
so he moved on to the unique shino-flute. 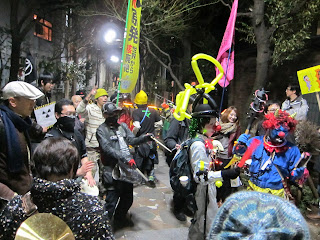 I haven't felt this free in a long time.

As part of my work with Green Action (a Kyoto based anti-nuclear group) I help maintain a website called Fukushima Update. Its probably the best up-to-date source of news about the situation in Japan regarding the Fukushima disaster. It could be better...help and suggestions are welcome.
http://fukushima.greenaction-japan.org/

The disaster at the Fukushima Daiichi plant, stricken by an earthquake and a tsunami last March, has led to widespread criticism of nuclear officials for their lax approach to safety, as well as for a bungled response that allowed meltdowns to occur at three of the plant’s six reactors.

The scale of the accident, which forced almost 100,000 people from their homes and contaminated a wide area of northeastern Japan, has put pressure on the government to explain why warnings about the plant’s safety went unheeded and global safety standards were ignored, even as officials promoted nuclear power as the country’s most reliable source of electricity.

Haruki Madarame, head of a panel of nuclear safety experts who provide technical advice to the government, told a Parliament-sponsored inquiry on Wednesday that Japanese officials had succumbed to a blind belief in the country’s technical prowess and failed to thoroughly assess the risks of building nuclear reactors in an earthquake-prone country.

For example, officials did not give serious consideration to what would happen if electric power were lost at a nuclear station, because they believed that Japan’s power grid was far more reliable than those in other countries, he said. The March earthquake and tsunami cut off the Fukushima plant from the grid, leaving operators unable to keep the reactor cores from overheating.

“Though global safety standards kept on improving, we wasted our time coming up with excuses for why Japan didn’t need to bother meeting them,” Mr. Madarame said.

Officials also gave too little attention, he said, to new studies raising the possibility of large earthquakes off the coast of Fukushima Prefecture. Mr. Madarame said he was to blame for some of the lapses, but that the Nuclear Safety Commission had a culture of complacency long before he took over in mid-2010.

His candid testimony comes at a time when the government is pushing to restart reactors around the country that were shut down following the accident. Only 3 of Japan’s 54 reactors are operating; the rest have been kept idle by local governments worried about safety.

To quell opposition, the central government has ordered new “stress tests” to assess whether the plants can withstand a major natural disaster. But the investigative commission’s hearings could undermine efforts to restart more reactors.

Mr. Madarame said the government should go far beyond the lax safety checks that Japanese regulators performed for years, which he said were still being carried out in some cases using “technology three decades old.” He said that regulators had been too cozy with the industry. Mr. Madarame also criticized Tokyo Electric Power, the operator of the Fukushima plant, for saying that it could not possibly have prepared for a tsunami as strong as the one last March, which killed 20,000 people along Japan’s northeast coast.

I miss living in nature.
This world (Tokyo life) feels so disconnected from life.
I miss clean air, scents of different plants, colors of nature,
birds singing, water flowing, no straight lines, life energy!
Sense of wonder and awe.
Below are pictures I saw on Takuya's (Japanese permy-friend) blog.
Brought me joy.
Nature is so awesome.
I live in insanity...but I am still alive.


These pictures remind me of a playground in Solentiname of Nicaragua.
ニカラグアで行ったことのある公園を思い出させる光景。 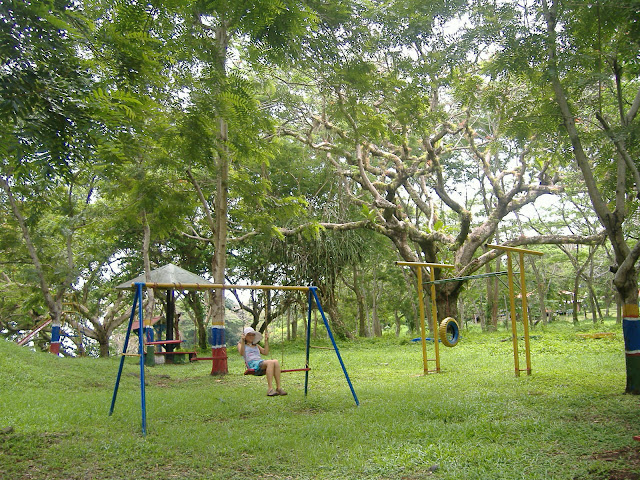 Life in the jungle
ジャングル生活 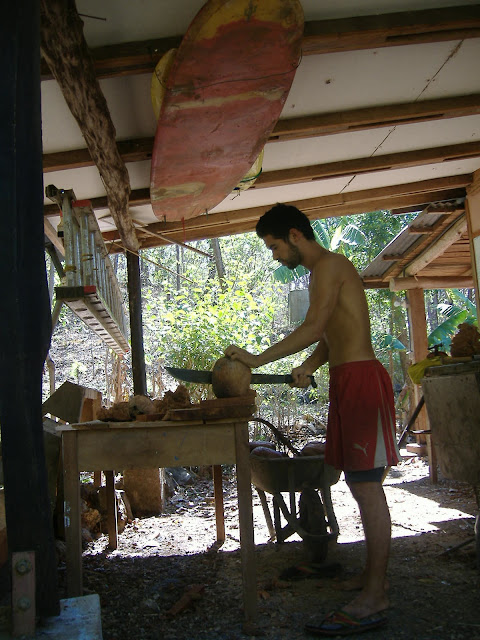 Gotta stop them nukes!
速く原発止めないと！
Posted by Kai 海 at 7:10 AM No comments:


Naomi Klein Talks to Occupy Organizer Yotam Marom: Why Did Occupy Take Off and What Happens Now?

The author of 'Shock Doctrine' interviews political organizer Yotam Marom about the future of the Occupy movement.

Anonymous activists have become terrifying to the powers that be, despite (or perhaps because of) their apparent disorganization and probably in excess of their actual capacity.

My permaculture has gone offline. Lo siento. I've been focusing permaculture energy on workshops but I have a backlog of stuff, mainly pictures from Bullocks and City Repair, and some social permaculture ideas. I'll make sure to do it at some point.

In the mean time, lets take a break from nukes and explore my other fascination, the occupy movement. I mainly wanted to share a youtube and a poster that I enjoyed.

1. Occupy Wall Street Consensus video
I've been showing this at my urban permaculture weekend workshops. Maybe as subtle brainwashing: don't be so obedient and occupy something! The official reason I show the clip though, is because I believe the ability to effectively facilitate groups of people  is essential to get things done well. Especially when we are talking about community.

In my experience, good facilitation produces amazing results. Poor facilitation produces immediate disasters or future time bombs. Most people and organisations I've engaged with do not seem to know the art of facilitation. Why would they? Authority figures making decisions is our dominant cultural paradigm. We are also used to two sided arguments, left/right, liberal/conservative, America/unAmerica, Demoblicans/Republicrats, good/bad etc. These two cultural practices help those in power keep their power, and make it difficult for communities to organise and become autonomous.

I could go on and on as facilitation has done wonders for me, but I'll just get to the video.
More on facilitation to come.
*the video is in English with Japanese subtitles.

http://visualeconomics.creditloan.com/occupy-wall-street/
Posted by Kai 海 at 1:43 AM No comments:


This is a Tokyo Urban Permaculture announcement
about a workshop I'm doing in Setagaya.

We will examine best practices while identifying challenges/fears that participants are facing. Then we will apply permaculture design principles to the social landscape and find practical next steps people feel comfortable taking. We will also develop a plan for Tanuki Village (an apartment complex hosting this event) as an experimental site where we will apply these practices and share the results through the internet. 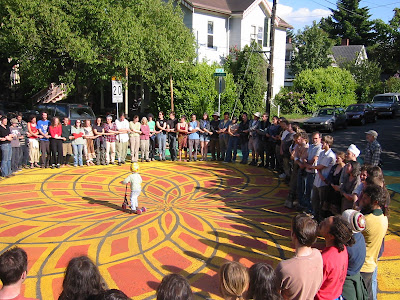 【ソーシャル・パーマカルチャー】
パーマカルチャーの原則を見えない構造、人間・社会システムに応用して行きます。アメリカで芽生え始めたパーマカルチャー運動の新しい領域。特に都会だと【食】などの資源の自給率には限界があります。しかし、都会には「人」という素晴らしい資源が豊富です。人と人を上手に繋げ合わせる事によって、お金のないやり取りが効率よくできたり、各人間や地域の可能性を最大限に引き出せるようになります。効果的なミーティングのファシリテーションや非暴力コミュニケーションを始め、あらゆるアクティビティを通して実力をつけて行きます。どこでもパーマカルチャーは地域レベルで考える必要がありますが、都会ではこのポイントは特に重要です。さて、どのように地域を巻き込んで行くか？人が集まるようになったけれど、どうすれば有効にみんなの興味やビジョンを行動に繋げて行けるか？役割と仕事の量をどのようにして効果的に分担すれば良いのか？これらの質問をみんなで答えて行きます。
Posted by Kai 海 at 2:40 AM No comments: