This is an article I wrote about chinampas, a mild fascination of mine. The article was for a crowdsourced book called Sustainable (R)evolution (click to check out this amazing project!). I also wrote articles on the Bullocks Permaculture Homestead, City Repair movement in Portland, the ecofarm movement in Thailand, and a brief overview of the natural farming movement in Japan. The article is just an overview based on my limited understanding so if you are into it, look deeper!


＊I think this is the final draft, pictures are different from the book. 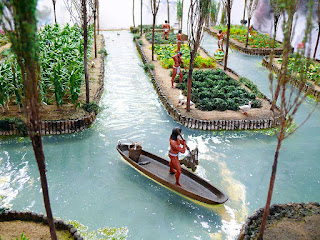 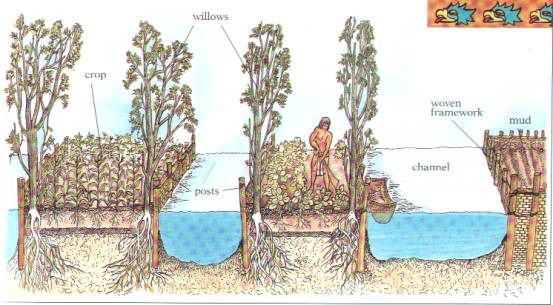 Illustration to explain how chinampas were made 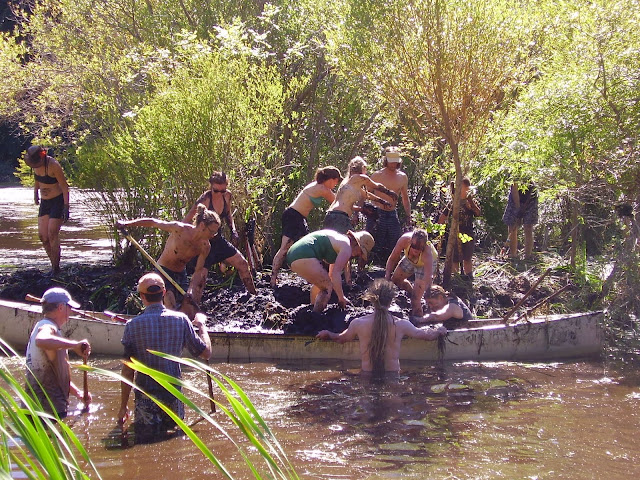 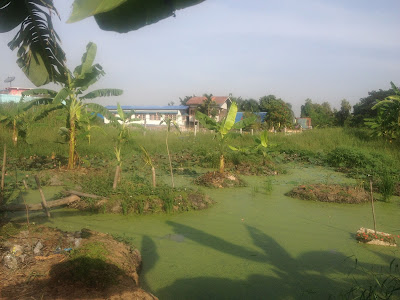 I also saw palm tree chinampas in Kerala, India but I lost the photo.

Chinampa agriculture has been described as ”a self-contained and self-sustaining system that has operated for centuries as one of the most intensive and productive ever devised by man” (Chapin, 1988, p.2). A chinampa is an agricultural field “island” constructed in shallow lake beds traditionally shaped in a long rectangle like a typical garden bed. Chinampas form a network of “floating” gardens on a body of fresh water (e.g. lake), and are often associated with the Aztecs, who developed an intensive agroecological system that can still be found in Xochimilco, Mexico.  Before the Aztecs, the lowland Mayans had been constructing chinampas, some of which were later occupied and further developed by the Aztecs. This unique Meso-American agricultural system exemplifies sustainable food production through its ability to maintain continuous long-term and year-round productivity utilizing local resources.

The term chinampa is thought to have come from Nauhatl words chinamitl and pan, meaning reed basket and upon. The Nauhatl words appropriately describe the key characteristics of chinampas, which were constructed by “piling bed-clay and mud from the lakes, aquatic plants, dry-crop silage, manure and silted muck upon one another in precise layers between paralleled reed fences anchored in the lake bottom” (Woodard, 2011). The construction process, as described by Prutzman (1998), begins with Chinamperos using a long pole to find an appropriate base. The dimensions of the chinampa are marked with reeds stuck into the ground. These reeds are then smothered with mud excavated from around the base, creating canals surrounding the chinampa for canoe access. Next, thick mats of water lily and tule reeds are layered to create a nutrient-rich compost pile. This is followed by another layer of mud mixed with soil from an old chinampa. The sides of these garden beds are secured with posts interwoven with reeds or branches. Finally, willow trees are planted around the edges to provide structural support and create a favorable microclimate. Water flows through the porous structure of these garden beds that are self-irrigated through capillary action.

Soil fertility is renewed by scooping up material from the bottom of the lake and canals onto the chinampa. Aquatic plants are also cultivated in waterways as fertilizer, and are piled onto the chinampa along with the mud. Planted willows contribute to fertility as foliage falls on the garden beds, creating a nutrient-rich mulch. The leaves that fall into the water feed the aquatic life and the nutrients will return to the lake bottom, only to be scraped back onto the chinampa. The willow trees also produce a microclimate by functioning as a windbreak and creating an air pocket with higher temperatures and humidity, greatly reducing frost damage.

Another key feature of chinampas are seedling germination beds and nurseries established at the edges of the chinampa by forming low terraces. These terraces are perpetually moist and humid, layered with nutrient-rich mud scooped from the bottom of the canal or lake, an ideal environment for seedlings. A thick layer of mud is spread over a bed of waterweeds, then after drying is cut into small rectangular blocks. Small holes are made in each block and a seed or cutting is implanted, covered by human or livestock manure. Reeds and newspaper were used to protect the seedlings from the frost. Once ready for transplanting, cubes are cut and planted into the designated location (Coe, 1964). This is a great example of “relative location” as plants are propagated where they will be transplanted and harvested, with little energy wasted for transport.

Chinampas are an excellent example of various permaculture principles in play: the extensive utilization of onsite biological resources (aquatic plants, willow), complete nutrient cycles, maximization of edges (canals, seedling nursery), relative location (water source and garden bed, seedlings), elements having multiple functions (reeds, willow), efficient energy planning (irrigation through capillary action), etc. Chinampas are ecologically elegant and highly productive, especially when compared to fossil-fuel-intensive modern-day agriculture with heavy chemical inputs (fertilizers, pesticides) transported from faraway factories. There is much that we can learn today about sustainable food production from this ancient Meso-American agroecological system that is believed to have provided sustenance for over a million Aztecs. 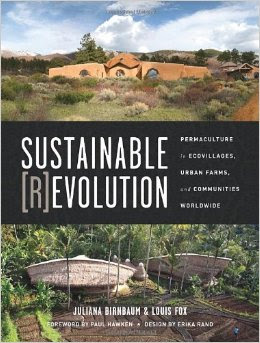