This is an article I wrote about the natural farming movement in Japan and Akame natural farming school. The article was for a crowdsourced book called Sustainable (R)evolution (click to check out this amazing project!). I also wrote articles on the Bullocks Permaculture Homestead, the City Repair movement in Portland, the ecofarm movement in Thailand, and on chinampas.

For more on natural farming (besides the well-known Fukuoka, Masanobu), you can search Kawaguchi Yoshikazu and akame (the topic of this article), and I highly recommend checking out the book (free online) Miracle Apples.


＊This is the closest to our final draft, and the pictures are different from the book 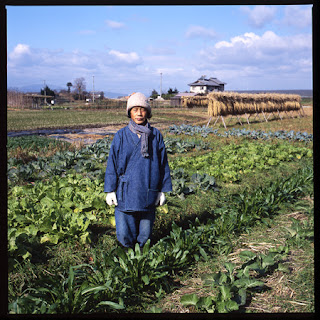 Kawaguchi, Yoshikazu in his garden 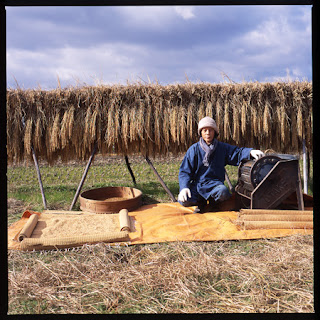 The traditional method of drying rice and hand-powered threshing 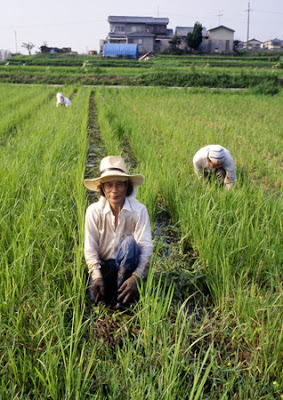 Yoshikazu in his rice-field cutting weeds with his kama 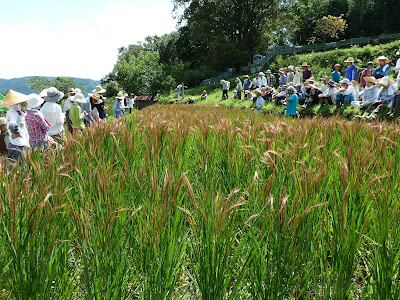 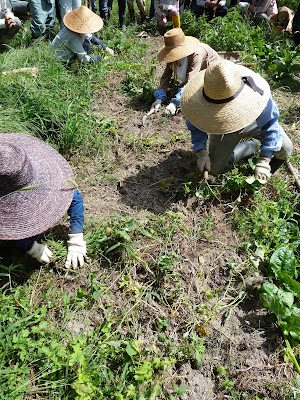 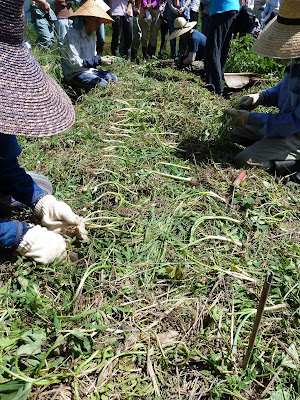 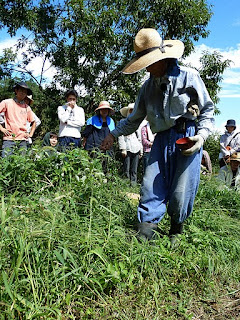 Broadcasting directly into the weeds 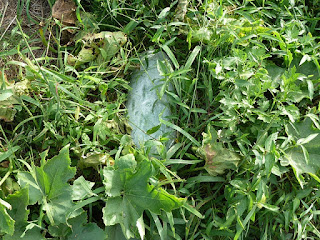 The harvest hidden amongst the weeds

A farming method that did not involve any pesticides or fertilizer use was first advocated by Japanese philosopher, holistic health practitioner, and spiritual leader Mokichi Okada. In 1950 he called his practice the "shizen noh hou" or the natural farming method. A decade later, plant pathology scientist and philosopher Masanobu Fukuoka also experimented with similar methods, but further extended natural farming methods to include no tilling and no weeding. In 1975, he published The One-Straw Revolution: An Introduction to Natural Farming. Fukuoka's impassioned advocacy of natural farming eventually made him a revolutionary figure in the global movement for sustainable agriculture. Passing away in 2008, Fukuoka did not live to see the revolution in consciousness he had hoped for, but the seeds of natural farming continue to thrive and evolve in Japan.

Today, a central hub for the natural farming movement is Akame-Shizenoh Juku (Akame-juku for short) , nestled near the border of Nara and Mie Prefecture. The site was originally an abandoned series of rice paddy and garden terraces surrounded by man-made forest. Seeing the need for a place where people could come to learn natural farming, Yoshikazu Kawaguchi, the respected practitioner and teacher of natural farming, reclaimed the terraces and started Akame-juku in 1991. The school is completely donation-based, each student paying what they can afford. Kawaguchi understood that most people attempting natural farming were at a major turning point in their lives and often had no money, whether they be conventional farmers trying to switch farming methods, white collar workers looking for a new way to live, or  students. He says that as a teacher, he wants to teach as many eager students as possible, and that he believes the quality of learning is richer when unobstructed by financial concerns.  Learning how to live life, which natural farming essential is, must be accessible to all people.

Yoshikazu also believes that freedom is essential for learning, so there are no obligatory group tasks, however, communal endeavors are a valuable opportunity to learn from one another.  Students are free to spend however much time they can afford in their rice paddies and gardens. Each new student is able to choose a plot among the fields and paddies that become available throughout the year enabling them to direclty put to practice what they learn. Every second weekend of every month (except January), Kawaguchi gathers all the staff members for a monthly gathering. Anybody can come to receive guidance by Kawaguchi and various staff members, cultivating their awareness and experiencing deep realizations about natural farming. The basic principles practiced at Akame-juku are, no tilling, no treating plants or insects as your enemies, and no using pesticides or fertilizers, including compost. Farming must be based on an understanding and respect for nature's dynamic balance that, if approached correctly, will work to nurture life as a whole.  These are guiding principles that are based on a holistic understanding of farming as a part of an ecological balance that we take part in cultivating. An example is Kawaguchi’s instruction for managing vigorous volunteer plants that are overwhelming seedlings: using a sickle as necessary, trim them at the base above their roots, so as not to disturb the soil structure.

The plants here are not treated as competitive weeds, but instead used as mulch and are not totally removed so as to leave food for insects. Food scraps from the harvest taken out of the fields may also be brought back to the fields. This is not fertilizer, but nutrients brought back as supplement simply to maintain the nutrient cycle. Students at Akame-juku experiment and learn how to nurture life through minimal interference in the natural cycle. Through this practice, they also nurture ecological balance, their own consciousness, and inner peace.

As Akame-juku hosts over 250 students every year, several thousand people have worked on the land since the school opened. Today, dozens of natural farming schools inspired by Akame-juku can be found all over Japan. Kawaguchi says that his greatest joy is to see former students starting their own study-groups and learning centers around Japan.

The path of natural farming is one of humility, deep observation, and constant flexibility. Kawaguchi says that he accepts that he cannot fully understand nature, but rather can only assist in nature’s cycles as best he can. Natural farmers realize the futility of imposing control over nature and the unsustainability of standard agriculture's attempts to artificially maximize yields and profits. Instead, through minimal interference in the natural cycle, natural farmers in Japan and elsewhere are showing the way to a healthy future for the earth and its inhabitants. 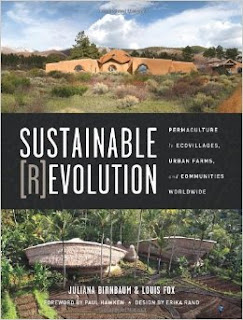