There are subtitles.
The Dub Ainu Band have Ainu roots.
Ainu are indigenous people that live in Hokkaido.
Posted by Kai 海 at 10:04 PM No comments:

This is a post about the Northwest Permaculture Convergence I recently attended in Oregon. The organizers said over 450 attended (or registered?) and there were probably over 50 workshops during the weekend. There was a solid emphasis on urban and suburban permaculture with much reference to social permaculture. I'll try to do an English write up but there might some some good write ups already on the net.
You can read the schedule and the bios of the presenters including a summary of the presentation on the Northwest Permaculture Convergence homepage below.
http://nwpermaculture.com/event-schedule/
Now off to Vipassana.
今年もノースウェスト・パーマカルチャー集会に行ってきました。
毎年人数が増えている恒例のイベント、
今回は４５０人以上が参加したそうです。
それだけ集まると力強いですね。
５０以上のワークショップや夜のダンスとドラムサークルなど、
盛りだくさんなイベントでした。
おしっこやウンチの収穫も行われていた
実践型のパーマカルチャー・ギャザリング。
日本でもパーマカルチャー集会ってあるのでしょうか？
なかったらやりたいです！
以下のようなワークショップが行われていました。
翻訳に時間がかかるので、
今日は五つのテーマのうちの一つをアップします。
だんだんとアーバン・パーマカルチャーに拍車がかかってきました。 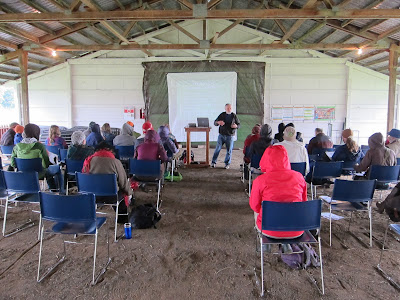 Place-Making: Place is Our Soil

A Permaculture Model of Conflict Resolution

Economies in Transition - A systems View 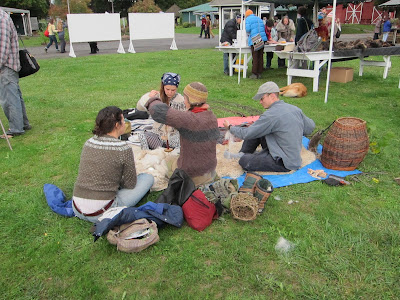 Back to Japan: Peace conference and Vipassana

Back in Japan once again.
Second attempt to survive my dreaded urban life
in the consumer-culture capital of Tokyo.
Woohoo!!!
Once I form a solid vision and have a community to thrive with,
I think I'll be more positively enthusiastic.
Community is essential.
Before I go back to Tokyo though
I'm attending the Peace as a Global Language Conference in Hyogo.
I actually first heard about this conference from a lady on Orcas island!
Then my brother who is currently apprenticing with a taiko drumming group,
Kodo*, encouraged me and my parents to attend.
I generally get motivated to do something when two unrelated (trustworthy?) sources endorse it.
Simple man I am.
The workshop I'm facilitating is going to be on Compassionate Communication
(aka Nonviolent Communication).
*Kodo is an amazing taiko drumming group and if you ever have a chance to see them I highly recommend it. You can get a sense of their practice from the beautifully made video on their website. The apprentices go through a rigorous program of meditation, gardening, cleaning, traditional arts practice, singing, movement, and drumming on the culturally unique island of Sado. 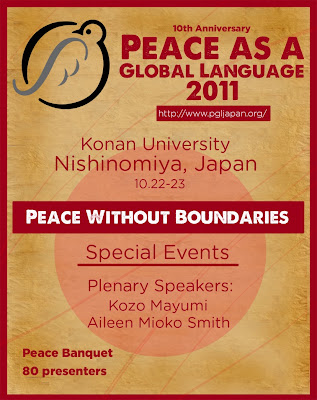 The official description of the conference:

Peace as a Global Language will be held on October 22nd - 23rd at Konan CUBE in Nishinomiya (Kansai), Japan. PGL 2011, Peace without Boundaries, appeals to all those wishing to come together and work towards peace. The Conference offers an exciting line-up of presentations, workshops and posters focusing on peace activism and education. PGL also hosts a photo exhibition and workshop featuring the works of internationally-renowned photographers spreading the message of peace. We aim to include the voices of the young, the old and the excluded: the community here in Nishinomiya, through a number of collaborative projects; university students, who will lead a workshop on peace for teenagers, culminating in the creation of peace banners and murals; and the underprivileged around the world, through a Peace Banquet to benefit Table for Two

http://www.pgljapan.org/
Then I am going to attend my first 10-day Vipassana retreat in Kyoto.
There was a surprising population of Vipassana meditators at the Bullocks,
and everyone had good things to say about the practice.
I remember a few monks and lay practitioners at Deer Park monastery also celebrating their experiences at Vipassana retreats.
My good friend A-Different-Kind-of Luxury-man Andy attended this Vipassana center in Kyoto too.
The practice sounds really intense.
Extreme inner-peace! 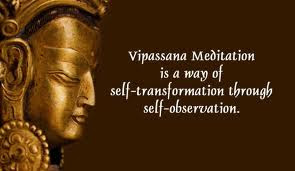 Below is a quote I came across while reading the "Communication that Blocks Compassion" chapter of Marshall Rosenberg's Nonviolent Communication: A Language of Life.
“I have thought for a long time now that if, some day, the increasing efficiency for the technique of destruction finally causes our species to disappear from the earth, it will not be cruelty that will be responsible for our extinction and still less, of course, the indignation that cruelty awakens and the reprisals and vengeance that it brings upon itself…but the docility, the lack of responsibility of the modern man, his base subservient acceptance of every common decree. The horrors that we have seen, the still greater horrors we shall presently see, are not signs that rebels insubordinate, untamable men are increasing in number throughout the world, but rather that there is a constant increase in the number of obedient, docile men.”
This quote in Marshall's book was embedded in an explanation about how we deny responsibility through a language he calls, Life-alienating Communication (as opposed to Life-connecting Communication).
He claims that we deny responsibility for actions when we attribute the cause to,
"Life-alienating communication both stems from and supports hierarchical domination societies...[and] has deep philosophical and political roots."
More on Nonviolent Communication soon.
Posted by Kai 海 at 4:47 PM No comments: 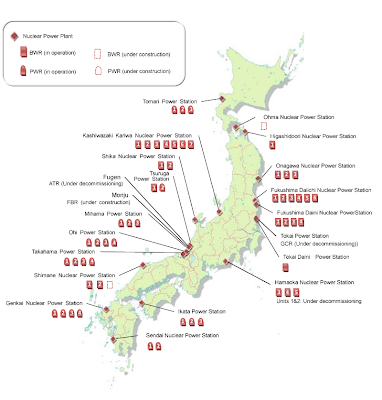 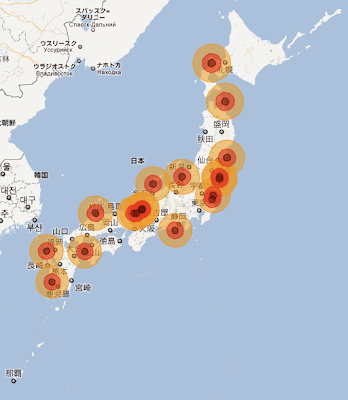 (from http://www.nanchatte.com/map/NuclearPowerPlant.html)
The three circles from small to large,
20km, 50km, 100km radii.
I included functioning nuclear reactors and the two fast breeder reactor sites.
The radii do not represent where the radiation will land though,
so as much as I want to live far from the nuclear power plants,
it's important to understand how the radioactive particles will travel.
Tricky stuff!
More reason to study up on your local climate.
Ultimately, it seems like there are very few places you can go,
to be safe-ish from potential radiation pollution.
USA version 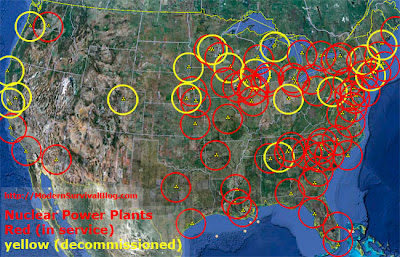 (from http://modernsurvivalblog.com)
Nuclear power plants in the US with a 100 mile radius.
Fallout Simulation Map 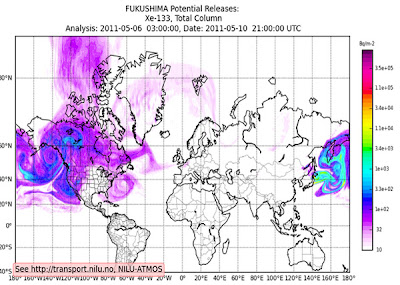 (from http://rea1001.blogspot.com/2011/05/radiation-from-fukushima-map-from.html)
Originally from the Department of Atmospheric and Climate Research,
the Norwegian Institute for Air Research (NILU).
I believe they have removed the map and replaced it with the following explanation,

We have discontinued our Flexpart forecast of the atmospheric dispersal of radionucleides from Fukushima. This due to the fact that we do not have access to reliable release rates reflecting the current situation at the plant to be used as input to our simulations. It is likely that the release of radioactive material is significantly reduced compared to the initial period, and that levels no longer pose a health risk at distance from the plant. 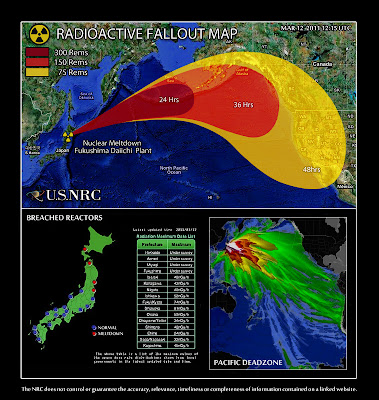 Its a cool looking map but I couldn't find the original source,
and a quick search on the internet lead me to numerous sites claiming
this was not made by any official organisation like the NRC or
ARS (other versions include an ARS logo).
The popular label is "Hoax map."
For a lazy information consumer like me,
its tricky not to be enticed by glossy official-looking information like this.
Especially since the map confirms my own ideas about what has happened,
making me less critical of the information I'm receiving.
In psychology we call this "confirmation bias."
Sometimes I am able to keep myself in check,
and luckily,
I have others making sure I don't mislead myself too far.
My perennial big questions is
who can we trust for reliable and accurate information,
particularly for politically and emotionally charged issues like nuclear fallout?
Posted by Kai 海 at 11:17 AM No comments: