Come join me on a tour of the sprouting Peace and Permaculture Dojo!

This is where we are at six months into the project (here is the first English article about the Dojo). I just got back from a three month Asia and Australia tour so my friends have been moving things along. We have had an amazing daiku (carpenter) who has been intensely building a relationship with the kominka (old Japanese house). The 100 year-old wooden house is tilted, so everything that he fixed is fixed to the angle of the tilt. WOW! The building rests on stones as a foundation, and after so many years, some of the stones have sank, and the wooden building has tilted.


What we are growing here is peace culture. Japan is rapidly shifting from a pacifist country toward a more robust aggressive military power. US pressure on Japan to increase military capacity has been increasing and the Japanese military industries have probably been lobbying pretty hard for revamping their industry. This is a historic shift since the Japanese Military Empire was A-bombed by the US Military Empire. Our hope is that, like Gandhi's ashrams, the Possibility Alliance in Missouri, Casa De Paz in California, Plum Village, and many other places to practice peace, this can be part of the global peace infrastructure during the Great Turning.

Even without that, we are facing consistent high rates of suicide, school/business bullying, sexual harassment, depression, apathy, depopulation of rural areas (ghost-towning of Japanese villages), exponential growth of national debt, an unprecedented nuclear meltdown and growing hibakusha population, super-aging society, and loss of traditional skills and wisdom to name some of the big ones. Not a very hopeful time to be born in Japan....or the world. So, we're here to change that. I mean come on, is this the best we can do after thousands of years of human evolution?!!

It's also important for us to remember and renew interest in Japanese wisdom and design. There is something quite strange about spreading permaculture in a country that has had thousands of years of practicing it. At the same time, I can get more young people excited about self-sufficient (village
-scale) ecological living if I call it permaculture than if I call it "traditional Japanese living." There are lots of other reasons for calling what we do permaculture, but I won't go into that for now. What I will say is that, we are developing a culture that is strongly influenced by the values and worldviews of the liberal West Coast (USA), and the beautiful relationship-based culture of rural Japan.

Below is a video of the traditional community dance ritual called bon odori practice session we did at the Dojo. A group from the "Bay Area of Japan" (shonan, Kanagawa prefecture) reclaimed this tradition, made original music and movements based on peace and ecology, and have been spreading it throughout Japan. The group is called imajin bonbu (Imagine Dance Group ← Imagine is from John Lennon). We just finished the floors of the Dojo, so as a celebration event, we had a bon odori practice session and the founding of a local bon odori dance group.

*the video is in Japanese but toward the middle you can watch people practice/dance. The dance is not a performance dance, so practicing and dancing is pretty much the same. Anyone can join and leave at any time, and some communities will continue dancing for days. I heard that people go into a trance.

Here are some pictures from the DOJO 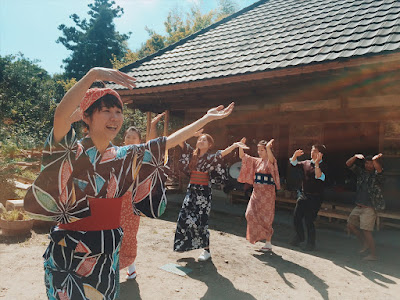 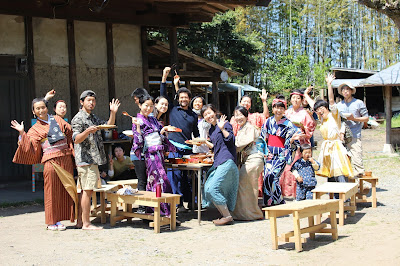 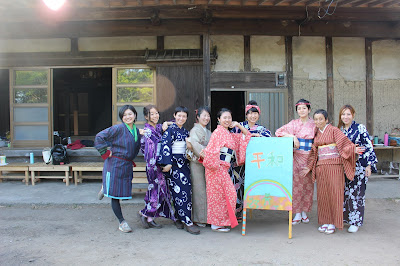 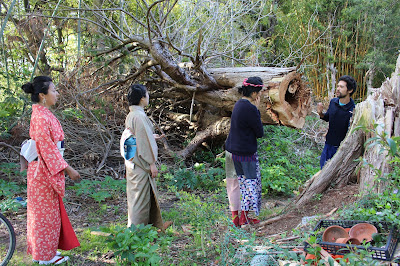 what era is this?!!
(the typhoon felled the Sugi tree) 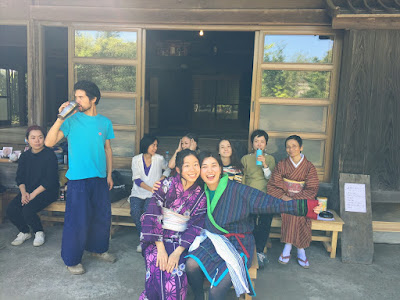 
VISITING / HELPING
We're still no ready to officially receive guests, but if you have time and skills that we need, and we happen to be able to respond to your email/message, then something could happen. All we have right now is a roof and floor, compost toilet is almost done, and a rocket stove. Unfortunately, we don't have enough committed people on the ground to receive guests at the moment, and nobody lives at the Dojo yet. I want to say YES to everyone but we don't have the capacity to comfortably host yet....and every once in a while things work out so its not a definite NO either. I guess its always a MAYBE.


The IDEAL characteristics of a volunteer at the moment are

Next year (2018), we will hopefully have more structure (social and physical), and be able to host people!

Love you all, may we all embody peace in every aspect of our lives

For most recent events and picture check out the Dojo FB page
Posted by Kai 海 at 8:51 PM