Here is number 2 posting on the week in review.

Saturday: Weed nursery, pot up 4 inch pots to 1 gallon, finish weeding and tying up raspberry bushes. There was also a solstice parade in town and a dance party at another farm.

and now for everybody's favorite...... 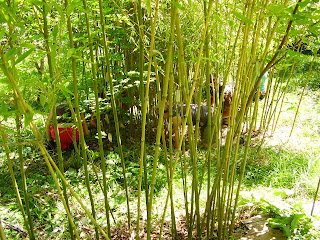 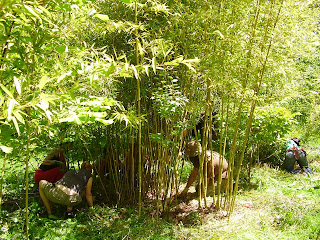 While watching out for new shoots, as they are fragile and pop up in unexpected areas, we weeded and thinned/pruned the bamboo grove (comprised of several varieties). We mulched the grove with the bamboo leaves we pruned off which I believe is high in nitrogen and silica. This area had also been a duck "tractor" site. 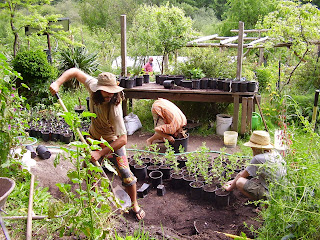 Potting up various plants that outgrew their 4 inch pots and needed to upgrade into a gallon pot. We planted a ton of Colutea, a nitrogen fixing flowering deciduous shrub, among other seedlings and clones. 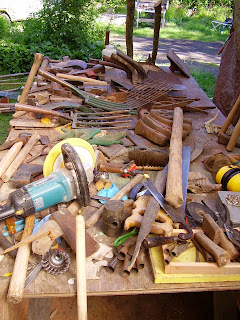 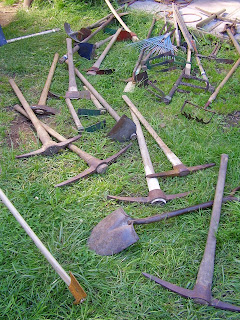 ....waiting for the doctor. 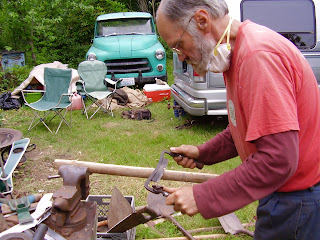 Michael, an old friend of Doug's, who just showed up one day while we were planting squash has a tool fixing business in New Mexico. He just rounded up all the broken or handleless tools and fixes them up while practicing Tuvan throat singing. He also has lots of stories about fixing tools on Native American reservations.

Here he is showing me how to shave wood off of this potential handle so we can fit a tool head on. What a valuable skill to know how to fix/make tools. He makes it sound really easy. 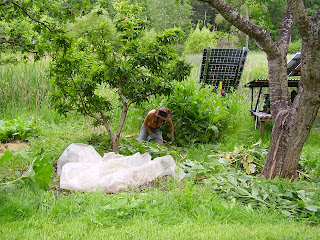 Mims working the kama with style.
We went around the property cutting down comfrey (mulch, dynamic accumulator, grass barrier, medicine, etc) that surrounds the fruit trees to create mulch donuts. Makes the place look so much tidier! The space between the tree and mulch donut is primarily to prevent mice and other creatures from chewing the bark and cambium off, which has killed a few trees on the property. 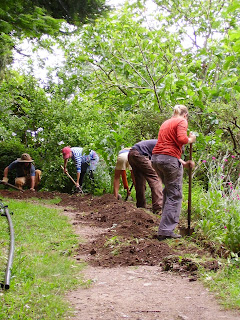 Trench diggin.
This was the first part of a new gray water system installation for our outdoor kitchen. The trench was to put ABS pipes to move the water to several different mulch pits inbetween fruit trees. I'll post a more detailed explanation of this gray water system. 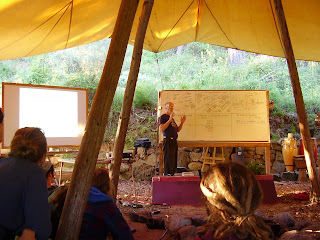 Michael giving a special presentation on nitrogen fixers and soil ecology. Fascinating. I'll hopefully post up the diagrams and notes from this event. One thing is for sure, he loves nitrogen nodules and fungi.